Whatever your memories are, Nerf has been around for what feels like forever, and it does indeed have a very colorful history.

It’s a brand that has been a favorite for generations. A toy brand that your grandad, your dad, and your kids will bond over.

In this article I am going to give you a rundown of the highlights of Nerf’s history, from the first Nerf gun ever made to today’s modern blasters.

Who Invented the First Nerf Gun?

Toy guns have been around forever, ever since some kid picked up a stick and started pointing it at people making “pew pew” sounds.

But did you know that the first Nerf Gun didn’t actually start with the gun? It started with the ammo!

Reyn Guyer is the man you have to thank for two amazing contributions to mankind. Back in Minnesota in 1969, he was a games inventor, who had experienced recent success with the release of his brand new game Twister (yup, this guy is a genius).

His second success was to develop the foam balls, which would later evolve to become the Nerf Darts that we know and love today.

The story goes that his team was working on a game about cavemen, where players had to bounce foam “rocks” over a net.

The foam balls worked so well they decided to develop a whole range of games around them, and then they took the concept to Parker Brothers.

The games didn’t make it to market, but the balls did, and in 1969 the first Nerf Ball was introduced as the “world’s first indoor ball”. The product was a hit with kids and parents. The soft foam meant that you could play with it indoors, as it would bounce off glass and other hard surfaces without causing any damage.

The original Nerf Ball was extended into a whole line with heaps of different versions, including the super-popular Nerf football, Nerf Ping Pong, and Nerf Pool.

Who would have thought a foam ball could be so much fun?

What Was the First Nerf Gun?

Well, the first gun was probably the Blast-a-Ball, which was released in 1989.

The Blast-a-ball wasn’t exactly a gun, and the design is a far cry from the blasters you see today, but it was the first toy that allowed you to shoot Nerf balls.

It was a plastic tube that you loaded the balls into, with a handle at the one end to pump air in that would shoot the balls out the opposite end of the tube.

It had a pretty rustic design, but it was advertised to be able to shoot 1.5 mm diameter Nerf balls up to 40 feet which was an impressive start to the Nerf range we know and love today.

The Blast-A-Ball was soon succeeded by the more superior Blast-a-Matic, a blaster that was able to fire several balls before reloading.

The Blast-a-Ball and the Blast-a-Matic were part of the very successful Original Nerf Series, available in retail stores from 1989 to 1993.

Check out this vintage commercial for the Blast-a-Ball:

Hasbro and the NERF Brand

The Nerf blaster really exploded when Hasbro took over the brand. Even though Nerf was originally started by Parker Brothers, a couple of takeovers later put the Nerf brand in Hasbro’s capable hands.

In 1987, Tonka took over Parker Brother’s parent company (Kenneth Parker Toys), and in 1991, the brand became part of Hasbro’s offering when they took over Tonka.

During this period is when we see the introduction of two key models that revolutionized Nerf blasters forever. In 1990, the first Bow N’Arrow Nerf gun was released, together with the new Nerf Arrows.

Only two years later, the world was blessed with the Sharpshooter, the first Blaster that could shoot Nerf Darts. It was love at first sight for many of us lifetime Nerf addicts. And the rest, as they say, is history.

Their popular, well-known slogan, “It’s Nerf or Nothin!“, is something we can probably all remember all too well.

What Does the Name NERF Actually Mean?

NERF stands for Non Expanding Recreational Foam, or does it…?

A few theories are floating around about the actual meaning of the NERF acronym, but the most likely explanation comes from the inventor of the Nerf ball himself, Reyn Guyer.

He explains on his website that his team didn’t actually come up with the name. In fact, their team’s working name, the “falsie-ball”, was definitely not child appropriate. It was an in-house joke about breast implants (because you know, the soft foam balls were, um, a good reminder).

Guyer didn’t find out that NERF was the product name until it was released on the market. Apparently one of the Parker Brother’s marketing team got the idea for the name from the foam-rolled bars on Jeeps, which had the nickname “NERF Bars”. Go figure.

NASA and the Super Soaker

Let’s talk about Lonnie Johnson. This guy is a powerhouse of creativity, with over 120 patents to his name, from generators to lithium batteries, and all the way to the very first Super Soaker.

Johnson had plenty of challenging opportunities in his working life to helping develop his creativity. He worked in the US Air Force as an engineer and later ended up at NASA’s Jet Propulsion Laboratory in the 1970s. During this period he was involved in the Galileo and Cassini satellite programs and even worked on the B2 Stealth bomber.

But of course, his most genius invention came to him as a bit of a fluke. The story goes back to 1982, he was at home working on another one of his inventions for a heat pump, when his device started leaking.

However, instead of just a dribble of water, it shot out like a jet, and the idea for the Super Soaker was born. His first prototype, which he made entirely himself at home from bits of pipe and a soda bottle, could shoot water up to nearly 40 feet.

In 1986 he patented the idea as a “squirt gun”, which even included a sound generator to make futuristic sound effects when the gun was shooting.

He sold the Squirt gun design to Larami Toys in 1989. They launched the first toy as the Powder Drencher in 1990, and in 1991 it rebranded as the Super Soaker. Two million of these toy guns were sold in that single year.

Later in 1995, Hasbro purchased Larami, and Johnson continued to develop new toys for them. And this is where the two stories collide, when Johnson worked out to adapt the Super Soaker to shoot Nerf projectiles instead of water.

The first proper pneumatic Nerf Blaster as we know today was born!

We have so much to thank Lonnie Johnson for, but there is a twist to this story. In 2013 Johnson was awarded a multi-million dollar payout by suing Hasbro for underpaid royalties, and the two parted ways.

The Future of Nerf

So, what’s next in the story of Nerf?

Fast forward to today, and Nerf is now a powerhouse brand. In 2011, Nerf made more than $400 million in revenue for Hasbro (that’s a lot of blasters!), and the brand has only become more powerful since then.

The N-Strike Elite, Mega and Rival series have been big movers for the brand, so I imagine that Nerf will continue to build on the success of these collections. It must be said though that their recent Elite 2.0 and Ultra series blasters have been somewhat disappointing.

But with every year we see Nerf expanding into new territories, including really crazy looking ranges like Zombie Strike, that really push the boundaries of what a typical blaster looks like and how it functions.

I can imagine we will see more partnerships with other cool brands that we know and love, like the Fortnite series and Deadpool series. I also think the Nerf community has grown so much and become so creative with modifications, that I wouldn’t be surprised if we are more involved than ever with the next range of designs.

Whatever the future holds, you can be confident that Nerf will be the first to blast through with the latest amazing designs. 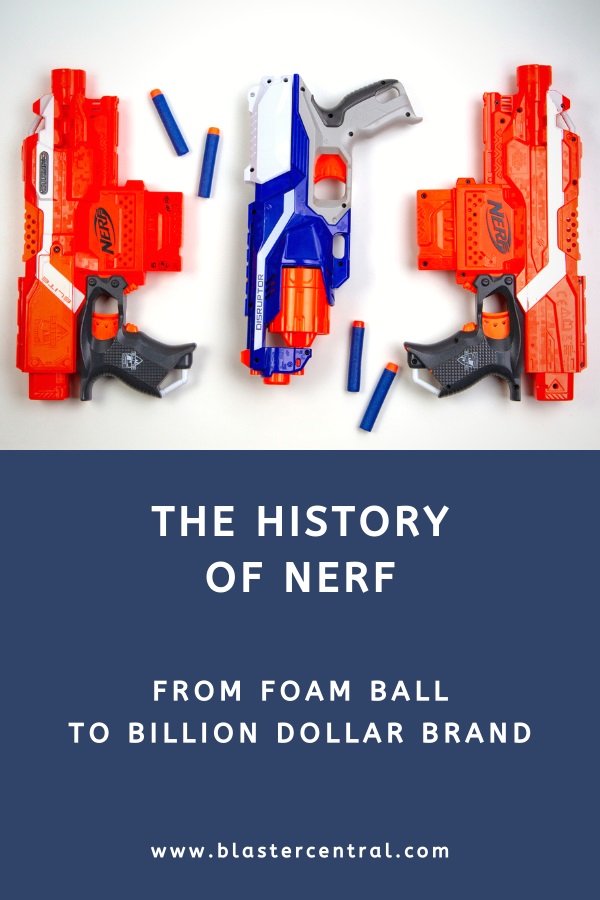