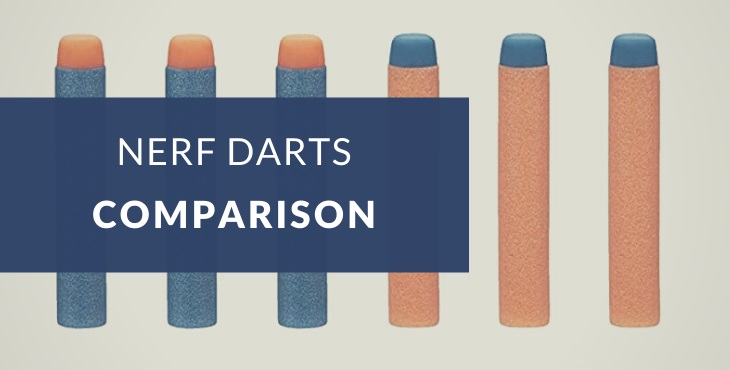 Hasbro has produced a lot of Nerf guns and blasters in various shapes, sizes, and price categories over the years.

There have also been lots of different types of Nerf ammunition produced ever since the very first Nerf gun came out, from simple foam darts to powerful ball-sized rounds.

In this Nerf darts comparison article, I am going to walk you through the various types of Nerf darts and explain their characteristics. This article will be continuously updated as new darts are released.

What Is the Best Nerf Dart?

What is the best Nerf dart?

The best Nerf dart ever made is the Nerf Accustrike dart. Further below, I am going to explain why, so please keep reading.

Do keep in mind though that the below list of darts only contains the real Nerf darts, the ones produced and sold by Hasbro.

There are other dart manufacturers out there, such as Adventure Force, and they sell pretty decent darts that are often cheaper, but for this list, I am sticking with Nerf darts.

With that in mind, let’s go through that list of Nerf darts in more detail.

The different types of darts are listed in chronological order, starting with the very first one ever made, the Sharpshooter Dart.

As mentioned, this list contains only darts, not other types of Nerf ammunition, such as rounds and arrows.

Introduced in 1992, the Nerf Sharpshooter was the very first Nerf blaster that could fire darts rather than balls. Unsurprisingly, that first dart was called the Sharpshooter dart.

The darts came packaged with the blaster and weren’t sold separately. This meant that you had to look after your darts, or otherwise you had to buy a new Sharpshooter blaster.

The dart proved to be a successful type of Nerf ammunition, which meant that Nerf continued producing new dart types. The next Nerf dart, released in 1993, was the Mega dart.

Also known as Sucker dart, the Mega dart had a suction cup making it stick to windows and walls. The first-generation Mega darts had a bright red and black color scheme.

In 2003, ten years after its first release, the Micro dart was succeeded by the N-Strike Micro dart (see further below).

Released in 2003, the Whistler dart was essentially a Micro dart, but it had a small opening at the front, creating a whistle when fired.

Released in the same year as the Whistler dart, the Sonic Micro dart was another version of the Micro dart that also had a small opening in the head, creating a whistle.

The Sonic Micro was known to be a bit more robust than the Whistler but also less accurate.

As mentioned, the N-Strike Micro dart was the successor to the popular Micro dart, and was part of the N-Strike series of blasters, which was released in the same year.

The N-Strike Micro dart still had the suction cup.

The Tagger Micro dart, or simply Tagger dart, was released in 2004 as part of the Dart Tag series.

They were named Tagger darts because they had a velcro head type, which meant that they would stick to vests and other types of clothing.

Also known as Clip System darts, Streamline darts were introduced in 2006 under the popular N-Strike series of Nerf blasters.

More precisely, the Streamline dart was introduced as the ammunition type for the brand new Longshot CS-6, which was the first Nerf blaster to use a clip.

This one also had a velcro head type but was modified such that it made a whistle when fired.

Perhaps the most revolutionary and most influential Nerf dart in history is the well-known Elite dart.

Released in 2012 under the brand new N-Strike Elite series, the Elite dart essentially made the Micro dart redundant. The Elite dart was a big step forward in regards to firing range and accuracy.

Check out my review of the N-Strike Elite Disruptor.

Also known as Rebelle darts, Collectible darts were a type of Elite darts but with their own identifiable color schemes.

They were released as part of the Rebelle series of blasters that had a more feminine design.

The N-Strike Maga dart, most commonly referred to as the Mega dart, was released in 2013 as part of the brand new N-Strike Mega series.

This was a noticeably bigger dart than what we were used to, designed to result in much-improved firing ranges. The Mega series proved to be quite successful, with a good amount of popular blasters.

A big improvement compared to the older suction cup dart is that with the Suction dart, the head is the same width as the body of the dart.

The Doomlands dart was another type of Elite dart, released in 2015 under the Doomlands 2169 series.

Blasters in that series are themed after a post-apocalyptic future set in the year 2169.

As the name suggests, the GlowStrike dart can actually glow in the dark. Released in 2016 as part of the GlowStrike series, a Star Wars-themed range of blasters.

The dart itself is similar to the Elite dart and has a white and green color scheme.

We’ve arrived at the best Nerf dart ever made! That’s right, the AccuStrike is, in my opinion at least, Nerf’s finest dart. It was released in 2017 under the revolutionary AccuStrike series, a range of blasters with improved accuracy.

AccuStrike darts have a unique spiraled tip that causes them to fly in a more horizontal direction. In addition, they also have a different weight distribution than Elite darts.

What’s great is that AccuStrike darts are backward compatible, which means that blasters using Elite darts can also fire AccuStrike darts. The negative? They are quite expensive.

Tests have proven that the AccuStrike Mega dart is indeed much more accurate than the Mega dart. The drawback, though, is that the firing range and velocity aren’t as good, probably because of that flat head type design.

The Ultra dart was another attempt by Hasbro to improve the performance of its blasters. This new dart type was released in 2019 under the new Ultra series, a range of blasters that haven’t yet seen the success that was initially anticipated.

Ultra darts have a more streamlined dart head with two tiny holes and two small fins at the bottom. They have a black and orange color scheme.

The Fortnite series was created in collaboration with Epic Games to help promote the online game Fortnite. Fortnite darts are basically Elite darts but with a recognizable blue and purple color scheme.

As the name suggests, the Fortnite Mega dart is a Mega version of the Fortnite dart, and has an orange and purple color scheme.

Blasters that use Mega darts can also use Fortnite Mega darts, and vice versa.

They are available in two color schemes, one with a blue/teal body and orange head, and the other with an orange body and a blue/teal head.

Check out my review of the Elite 2.0 Commander RD-6.

The blue Mega XL dart is the latest dart, introduced in 2021 as part of the Mega XL series of blasters. It’s called Mega XL for a good reason because this is officially the biggest Nerf dart ever produced. It’s twice as thick as the N-Strike Mega dart and also slightly longer.

The dart is designed such that it makes a whistle as it flies through the air. The funny thing is that the regular Mega dart fits inside this new Mega XL dart since it’s hollow and the hole is precisely the size of the Mega dart.

The AccuStrike Ultra dart was introduced in 2021 as a better-performing version of the 2019 Ultra dart in regards to shooting accuracy.

If you look closely, you will see that the AccuStrike Ultra dart has a flat head, and the color scheme is also different.