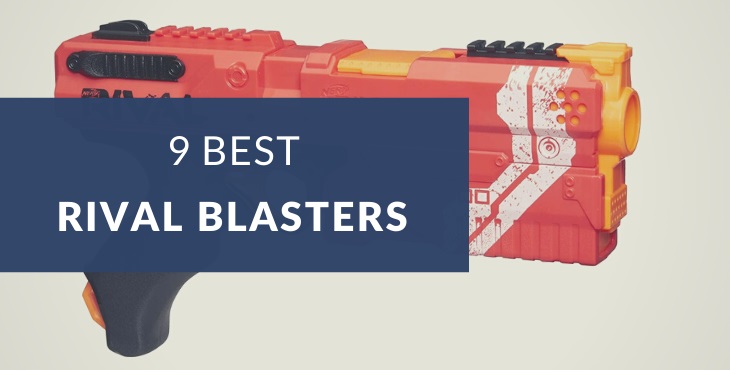 As you may already know, I am a huge fan of the Nerf Rival series. I’ve already published a few reviews of Rival blasters on this website, with more to follow.

Rival blasters are generally quite powerful, often have quite intimidating looks, typically offer a smooth firing mechanism, and come in various shapes and sizes.

In this article, I am going to share what I believe are the nine best Nerf Rival blasters, and I will also run you through the ins and outs of the Rival series.

About the Nerf Rival Series

The Nerf Rival series was first announced in 2015, with the Apollo XV-700 and the Zeus MXV-1200 being the first blasters in that series.

The purpose of the Rival series (officially written with full caps as RIVAL) was to bring to market high-performing blasters for competitive team vs team play. Rival blasters are typically available in red and blue color schemes, supporting the team play aspect.

A new ammo type was designed specifically for the Rival series. These High-Impact Rounds are not darts. Instead, they are small yellow balls with dimples, similar to what golf balls look like.

You may have noticed the rather interesting names given to Rival Blasters. For example, Artemis XVII-3000, and Prometheus MXVIII-20K.

If the blasters themselves aren’t impressive enough already, then their names certainly are! What’s even better is that these funky names weren’t just randomly chosen.

The names actually refer to Greek and Roman mythological figures. Prometheus, for example, is a Titan God of fire.

The letters are Roman numbers that refer to the year the blaster was first released. For example, the Artemis was released in 2017, indicated with the Roman number XVII, which means 17.

Some Rival blasters also have an M, which means they’re motorized blasters. For example, the Prometheus is a motorized blaster that was released in 2018. As such, the name includes (M) and XVIII.

To recap, this is how the Prometheus MXVIII-20K got its name:

How cool is that?

The target market for the Rival series was older kids and adults. Rival blasters were never designed for young kids because they are so powerful. Plus, the ammo, High-Impact rounds, is very different from the classic Nerf darts.

The official recommended age for Rival blasters is 14 years and older, which I think is fair enough. That older target audience only makes sense, given the power of these blasters combined with the type of ammo used.

When the Rival series first came out, the blasters weren’t actually allowed in Australia because they didn’t meet the local toy safety standards. Some might say that that’s a bit excessive, but it does say a lot about this range of blasters.

Overall though, I can honestly say that I find Nerf Rival blasters pretty safe. Getting hit by a High-Impact round can certainly be felt but doesn’t hurt. Wearing goggles to protect the eyes, though, is a good idea.

As with other Nerf series, the Rival series of blasters also has a few sub-series. The most notable Rival sub-series are the following:

Three blasters in the below list of best Nerf Rival guns are from various sub-series.

The Hades and Prometheus are part of the successful Phantom Corps sub series, and the Jupiter is part of the Edge series.

Here we go, this is my top 9 list of best Nerf Rival blasters you should add to your Nerf blaster collection.

Let’s start with what is, for many, the most popular Nerf Rival blaster. The Nemesis is an absolute game-changer in the world of Nerf. It’s a high-performing, fully automatic flywheel and conveyor blaster with a firing capacity of 100 rounds.

The rounds are loaded through a detachable purpose-built hopper system, which allows you to quickly throw 100 rounds in and start firing away with a claimed velocity of 100 per second. This is a fully automatic blaster, though, which I know isn’t for everyone.

Check out my review of the Nerf Rival Nemesis MXVII-10K.

Smaller than the Nemesis, the Artemis came to market in 2017. It’s a spring-powered blaster with a pump-action priming system and a firing capacity of 30 rounds. It has a turret system at the front that rotates when priming.

The Artemis carries three magazines that are integrated into the top of the blaster, with each one holding ten rounds. Each time you prime, the barrel rotates and uses a round from one of the three magazines to fire.

What’s great about the Artemis is that it lets you single fire as well as slam fire, and the big sliding handle at the front is essentially the primer. It’s a mechanism that works nicely, is ergonomic, and overall looks really cool, if not intimidating.

Check out my review of the Nerf Rival Artemis XVII-3000.

First released in 2018, the Kronos is a pistol-style spring-action blaster with a firing capacity of 5 rounds. It carries a spring-loaded internal magazine.

Reloading, priming, and priming is an incredibly smooth affair with the Kronos. That, combined with its great looks and fantastic performance, makes the Kronos a must-have Rival machine.

Pistol-style Nerf guns aren’t for everyone, but the Kronos certainly won’t disappoint. It’s perhaps the best blaster you can currently get your hands on in that category of Nerf blasters.

Check out my review of the Nerf Rival Kronos XVIII-500.

The Hades is the first Rival blaster in this list that is part of the exciting Phantom Corps sub-series. Released in 2018, the Hades is a pump-action blaster with single and slam fire capabilities.

The great-looking Hades has an integrated magazine that holds 60 High-Impact rounds. The priming and firing mechanism is very intuitive, and re-loading the rounds into the magazine is just as easy.

You may have noticed already that the Hades is very similar to the Artemis, both in looks as well as in mechanics. The Hades has a bigger magazine capacity, and overall, the blaster is larger than the Artemis.

Check out my review of the Nerf Rival Hades XVIII-6000.

The Perses, first introduced in 2019, is a compact flywheel and conveyor blaster with a generous firing capacity of 50 rounds. The rounds are loaded into a hopper system, similar to how that works with the Nemesis.

What I like most about the Perses is that it has a comfortable and lightweight design, yet it can carry many rounds and perform incredibly well. It’s a fully automatic blaster with a smooth and fast firing mechanism.

The conveyor feeding mechanism, combined with the hopper system, works nicely and makes the Perses such a fun Rival blaster. Jams can happen with this setup, although they are rare and can be easily fixed by popping out the hopper.

Check out my review of the Nerf Rival Perses MXIX-5000.

The second Phantom Corps machine in this list of best Nerf Rival blasters is the impressive, intimidating, and over-the-top Prometheus MXVIII-20K. But most of all, the Prometheus is a super fun machine to play with and should be part of your collection.

The Prometheus was released in 2018 as a fully automatic flywheel blaster with a staggering 200-round firing capacity. As you can tell, the Prometheus is similar to the Nemesis, but I would argue that the Nemesis is perhaps a more serious weapon.

The hopper magazine is removable, which makes reloading your 200 rounds a very easy process. And once you’ve fully loaded the hopper, you can start firing with a claimed maximum of 8 rounds per second rate of fire. Wow, seriously.

Check out my review of the Nerf Rival Prometheus MXVIII-20K.

Released in early 2020, the Nerf Rival Takedown is a pump-action blaster with an 8-round firing capacity. The takedown has an internal magazine which can be accessed from the top of the blaster by opening the little hole through a priming action.

The priming mechanism with the pump handle at the front is quite smooth, and so is the firing. It’s single fire only, even though the priming handle makes you want to slam fire.

One thing you’ll notice straight away when looking at the Takedown is the somewhat awkwardly shaped grip. It’s a comfortable grip, though, that fits larger hands nicely.

Overall, the Takedown is a robust and to-the-point Rival blaster that deserves a spot on this list.

Check out my review of the Nerf Rival Takedown XX-800.

Even though the firing capacity of 12 rounds is relatively low compared to other Rival blasters, the Hypnos does allow you to clip an extra 12-round magazine to the side of the blaster.

One thing that makes the Hypnos stand out is the folding shoulder stock at the back of the gun. It can be folded to the side of the blaster and can be used for extra storage.

The last machine to complete this list of best Nerf Rival blasters is the Jupiter in the Edge sub-series. As someone who appreciates good Nerf sniper rifles, I just had to include the Jupiter on this list.

As mentioned above, the Edge series was introduced to focus on target shooting, and the Jupiter certainly delivers in that aspect. In addition, the Jupiter looks and feels incredibly robust and has a very smooth bolt action priming mechanism.

I do recognize that sniper rifle-style blasters aren’t for everyone, but the Edge Jupiter is something different. It has the power and performance of the Rival series and the precision and sophistication of the Edge series. It’s the best of both worlds, if you ask me.

Check out my review of the Nerf Rival Jupiter XIX-1000.

Do you agree with my list of best Nerf Rival guns?

This is, of course, a highly subjective topic, but I do think the models listed above are fantastic Nerf Rival blasters. I’ve also tried to make this list as varied as possible, with different types of blasters included.

For example, not everyone will like the Rival Jupiter, but as rifle style blaster, it is an excellent machine. The same applies to the Kronos. Not everyone will buy a pistol-style Nerf blaster, but the Rival Kronos is one of the best in that category.

In any case, I hope the above list has given you enough food for thought. And with new Rival blasters coming out regularly, I will keep updating this list.