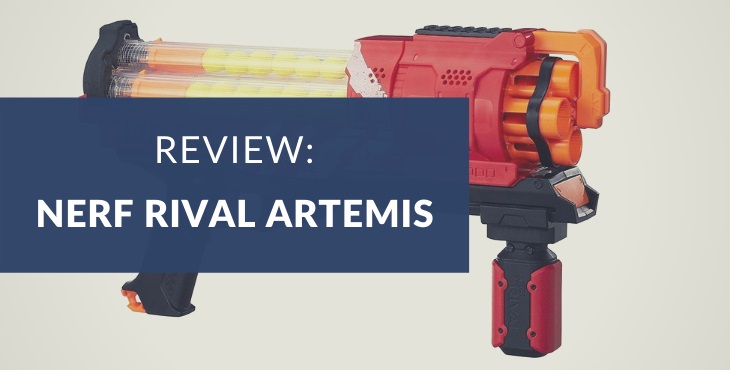 The Nerf Rival Artemis XVII-3000, part of the popular Rival series, is a chunky but spunky pump-action blaster for when you need to go into full Scarface mode.

In this review, I will run you through some of the key features and give you my take on the highs and lows of this blaster.

You can purchase the Nerf Rival Artemis blaster on Amazon.

What Is the Nerf Rival Artemis?

The Nerf RIVAL Artemis XVII-3000 was released in Fall 2017 by Hasbro, and is a spring-powered blaster. It’s a small to medium-size blaster within the Rival series which Nerf started releasing back in 2015.

It has a pump-action priming system and firing capacity of 30 High-Impact Rounds with a turret system at the front that rotates when you prime. It comes packaged with 30 rounds and instructions.

It’s the first of the RIVAL series to be named after a female deity, and they picked a good one – if you didn’t already know, Artemis is the Greek goddess of hunting.

If you’re into the techy side of blaster design, the Artemis has a really interesting shooting mechanism. And if you don’t care, just know that this is a pretty awesome blaster, with a good rate of fire and a cool style.

3 Reasons You Need to Have the Nerf Artemis

Here’s my take on the Nerf Artemis.

1. “Say Hello to My Little Friend”

Why the Scarface reference?

Because if Tony Montano was a Nerf fan this would have been his weapon of choice in that infamous scene (but watching him pick up all the rounds at the end would have been way less entertaining).

The shape of the Artemis is similar to an SMG, with a two-hand grip required to fire and prime the blaster (more on that later in this article).

Some might find it a little top-heavy, but for me, the large trigger handle is comfortable to grip and allows you to balance the blaster nicely.

There is also a safety lock button that sits just behind the trigger, which is pretty easy to press on with my thumb (I’m right-handed) and off with my index finger from the other side of the blaster.

There is a short Nerf Rival rail along the top of the Artemis, but take note that this isn’t a Tactical Rail or a Picatinny Rail (the size is different even though it looks very similar in shape).

Nerf has also included two sling points along the rear edge of the blaster, one on the trigger handle, and the other just below the back of the magazines.

What this means is that the blaster is designed to hang vertically off your shoulder (so the barrel is pointing down) when you’re not using it. From my experiments, this is actually kinda useful for two reasons.

First off, if you’re carrying more than one blaster, it’s easy to push the Artemis out of the way and let it just hang off your shoulder when you’re shooting away on your alternate blaster.

The second reason is that this blaster is not designed to sit up against your shoulder like a rifle blaster when you’re using it (that would be super awkward), therefore the sling points don’t need to accommodate for firing in that position.

Another awesome aspect of the Artemis, is that you can purchase the blaster in two different colors for team play.

Team Red (top section in red, handle and base in black and barrel details in orange) or Team Blue (blue, black and orange).

At first glance, the Artemis looks a bit like your typical blaster that uses external “plug and play” magazines, but actually, it’s a little more complex than that.

These 3 magazines are actually integrated into the top of the blaster and each one holds 10 rounds each. This blaster is only compatible with the Nerf Rival ball rounds, not Nerf darts or any other ammunition.

A plastic shroud on top slides back to reveal the re-loading holes, which allows you to feed single rounds directly into each of the 3 magazines.

The shroud also pulls back the spring to remove the tension to make it easy for the balls to slide freely into each magazine.

Once you have finished loading, you just slide the shroud forward into its original position, which resets the springs and covers up the re-loading holes.

There is another neat design feature that I have noticed, which is that these holes have been carefully designed to work like a valve.

You can easily load the balls in, but they don’t fall out if you accidentally tip the blaster over or flip it upside down, which super handy when you are trying to reload mid-game.

On the other hand, it can be a bit painful feeding in the balls one by one into each magazine, and there are several other blasters out there that are way more efficient to re-load.

The Nerf Rival Perses, for example, uses a hopper system that allows you to feed big handfuls of balls at a time straight into a wide chamber.

Some other blasters use external magazines instead, which work by allowing you to pull the whole magazine out, pre-load it with 30 rounds, and then plugging it back in.

This system does require a bit more prep before you start playing. But the advantage is that you can reload faster while you play if you carry pre-loaded magazines with you.

The Artemis has a decent rate of fire. Hasbro advertises at a velocity of up 100 feet per second (30 meters per second). The sliding handle at the front is your primer, and this blaster can shoot either in single fire or Slam fire.

The way this blaster shoots is pretty cool. Every time you prime the barrel rotates and takes a round from one of the three magazines.

This doesn’t really add any value to your game, and it can mean that you will end up with a few misfires, but it’s a clever mechanism that you can appreciate if you’re a true Blaster Nerd like me.

Slam Fire mode is always fun to amp up your game. The only small critique I have for this blaster is that the accuracy of your shots may be a bit off in this mode if you’re a little too violent when you pump that priming handle back and forth.

But maybe that’s only relevant for someone super uncoordinated like me. Duh.

Also read:
My review of the Nerf Rival Nemesis.

The Artemis is your Goddess of the Hunt, a solid blaster with a cool, if slightly over-engineered, design. I do like the styling, the way it looks and feels in my hands make me feel like a boss, and functionally there is nothing major to complain about.

External magazines are always handy, but if you’re playing a long game you can easily carry a couple of these blasters around and just swap on the hop when you run out of ammo. You know, just like Scarface…

So in conclusion, go forth and get blasting. But before you go, make sure you check out my list of best Nerf Rival blasters, to see which ones are my favorites.