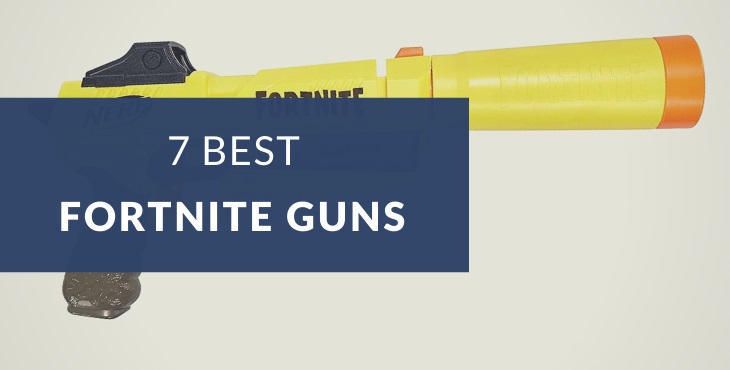 The Nerf Fortnite range of blasters was first introduced in 2019 and is based on a popular video game that goes by the same name.

Unsurprisingly, each blaster in the Nerf Fortnite series is based on one of the weapons used in that game.

In this article, I am going to explain what the Nerf Fortnite series is all about, followed by my personal top seven guns in this unique range.

About the Nerf Fortnite Series

Nerf Fortnite is more than just another series of Nerf guns. It’s a real Hasbro brand that contains more products than only blasters.

The brand was introduced to help promote the game Fortnite, a hugely popular online multiplayer game developed by Epic Games in 2017.

The Nerf Fortnite series is purely theme-based. The guns in the series don’t come with exciting new functions, features, or technology. Nerf Fortnite blasters are themed weapons that use existing Nerf technology.

As a result, the Fortnite series isn’t exactly super popular with hardcore Nerf fans, but more so with fans of the game Fortnite, and also with those who appreciate the unique look and feel of Nerf Fortnite guns. And some of them do look great.

While the Fortnite series doesn’t offer any groundbreaking new technology, it does introduce a brand new dart, the Fortnite dart.

But before you get excited, this isn’t really a new dart at all. It’s basically an Elite dart but with a different color scheme to match the Fortnite theme. The body of the dart is blue and the dart head is purple colored.

But again, it’s basically the same as a Mega dart but with a different color scheme, orange, and purple.

Check out my complete list of all Nerf darts to see all the different darts that Nerf has produced over the years.

You may have noticed the rather cryptic names of the individual Nerf Fortnite blasters. The abbreviations, like “AR-L” and “SMG-E”, aren’t just made up though, they do actually mean something.

The letters before the dash represent the type of gun as per the video game. For example, AR stands for Assault Rifle, and SMG stands for Sub Machine Gun.

The letter after the dash represents the rarity, also in line with the game. Using the same examples, the L stands for Legendary, whereas the E stands for Epic.

Note that not all Nerf Fortnite blasters are named this way, but most of them are, which is kinda fun.

Read on, as I am now going to discuss my top seven Nerf Fortnite blasters.

Here we go, this is my top 7 list of best Nerf Fortnite guns you should consider adding to your Nerf collection.

The 2020 Nerf Fortnite SMG-E is a semi-automatic, flywheel system blaster that can hold six Fortnite or Elite darts. The six-dart magazine can be replaced by a higher capacity N-Strike version, should you have that already in your collection.

Firing with the Fortnite SMG-E is pretty easy and fun. It has a flywheel system, which means you need to pull the acceleration trigger to power the flywheels, and then use the firing trigger to fire the individual darts.

Overall, the firing mechanism with the SGM-E is smooth and offers respectable performance. Do note though that the Fortnite SMG-E requires 4 AA batteries which are not included.

The Nerf Fortnite SP-L is a spring-powered, sidearm pistol-style blaster, with a slide action priming system. The long, detachable, barrel is what makes this blaster stand out, not that it makes it perform better, it just makes the gun looks incredibly cool.

As mentioned, this is a spring-powered blaster that can carry three Fortnite (or Elite) darts in its internal magazine. It’s a single-fire blaster only, so no slamming with this one, but that only makes sense for a pistol-style blaster.

And in case you were wondering, the abbreviation SL stands for Suppressed Pistol. Good to know!

Check out my review of the Nerf Fortnite SP-L.

Number three in this list of best Nerf Fortnite guns is the 6-SH, a hammer-action revolver-style with a respectable firing capacity of six darts. It has a cylinder-style magazine that is very easy to load.

Note that the rather large barrel comes packaged as a separate component, but once attached, it is not designed to be removed and replaced. Not an issue at all, it’s just different from the SP-L which does have a detachable barrel.

Firing with the 6-SH is quite easy and smooth, despite the hammer action mechanism, although performance is a bit lacking.

The Nerf Fortnite BASR-L is a bolt-action sniper rifle-style blaster with a firing capacity of six darts. The interesting, and also weird, thing about the BASR-L is that it can fire in single as well as in slam mode, which is rather unusual for a rifle-type weapon.

The Fortnite BASR-L is not an outstanding performer, especially compared to other Nerf sniper rifles, but it offers a very smooth priming and firing mechanism. And it also just looks good, in my humble opinion at least.

I appreciate the BASR-L so much that I have it included in my list of best Nerf sniper rifle blasters. Make sure you check that out if you’re interested in that type of Nerf gun.

Check out my review of the Nerf Fortnite BASR-L.

What I like most about the Heavy SR is its intimidating design. It’s big, it’s bold, it has all the characteristics of a real sniper rifle, and the color scheme is fantastic too. The blaster works very similar to the BASR-L and also has a magazine that can hold 6 darts, but the Heavy SR fires Mega darts instead.

I prefer the BASR-L over the Heavy SR though, because it performs better and feels much lighter in the hands.

Check out my review of the Nerf Fortnite Heavy SR.

Released in the first half of 2021, the Nerf Fortnite Pump SG is a mean-looking, pump-action shotgun-style blaster with a modest firing capacity of just one dart. It does come packaged with four Fortnite Mega darts though, which is a bonus.

If it can only fire one dart, then why do I like it? Good question! I appreciate the Fortnite Pump SG because of its simplicity, its mechanics, and its looks. I personally think this blaster looks absolutely fantastic, which is half the fun. In addition, its priming and firing mechanism feels rock solid.

Do note though that the Fortnite Pump SG is basically for fun only. It’s definitely not a performance monster at all, and the fact that it can only hold one dart doesn’t help either. In other words, there are better Nerf shotguns available out there. But like I said, the Pump SG is fun.

The 2022 Compact SMG is a semi-automatic flywheel blaster that runs on four AA batteries and features an internal dart clip that can hold up to eight darts.

The first thing you will notice with the Compact SMG is its unusual appearance, which some may like and others perhaps not so much. I can always appreciate bold designs and I think the Compact SMG looks great, even more so with that bright red color.

The darts can be loaded into the internal magazine at the bottom of the blaster, which means you have to turn the blaster around. A bit unusual and slow, but easy to get used to. The firing process with the rev and the trigger button feels very smooth and the performance is also acceptable.

There you have it, my list of the best Nerf Fortnite guns currently available. Do you agree, or disagree?

Overall, I quite like this series of blasters. While it may not offer anything new, there is nothing wrong with producing a series with a certain theme.

It may attract a new audience, and that’s always a good thing in my books.