The Nerf Helix XXI-2000 is a spring-powered, hopper-fed, pump-action blaster in the Curve Shot sub series of Rival.

One of the key features of the Curve Shot sub series is the rotating barrel that offers the ability to shoot rounds in a curve.

In this review of the Helix XXI-2000, I am going to walk you through some of the top features of this blaster, and I will share with you my personal thoughts.

You can purchase the Nerf Rival Curve Shot Helix blaster on Amazon.

What Is the Nerf Rival Curve Shot Helix?

The Nerf Rival Helix XXI-2000 was released in the second half of 2021 as part of the Curve Shot sub-series of blasters. Curve Shot blasters are able to fire in a curved trajectory with the help of a twist-around muzzle. 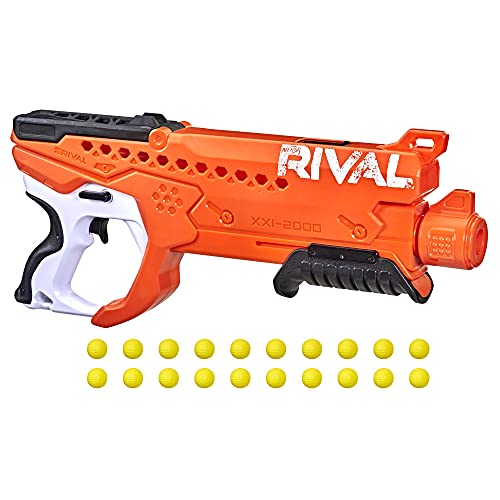 The Helix XXI-2000 has an internal hopper that can carry up to 20 High-Impact Rounds, and has two sling points; one at the bottom of the grip and one on top of the barrel.

Read on, as I am going to discuss this rather unique blaster in more detail and I will reveal whether it is worth buying.

3 Reasons You Need the Nerf Helix

Here’s my take on the Nerf Rival Helix.

As mentioned, the number one feature of the Helix XXI-2000 is the curve shot effect, and while it may not appeal to everyone, it’s actually quite a fun feature that works surprisingly well.

But as fun as the curve shot effect is, it is also not much more than a gimmick. It’s not going to give you any advantage in Nerf battles, it’s just for fun. Nothing more, nothing less.

Also note that you don’t need to use this feature at all. Simply keep the barrel in its default position and the blaster will fire as per normal.

Rounds can be loaded into the hopper, which has two separate channels, through the top of the blaster. A cool feature is that you can see the rounds from the side of the blaster through a set of holes.

The official capacity of the hopper is 20, but you can easily beef this up to 30 as there seems to be more than enough space.

While the priming mechanism is reasonably smooth, it is a bit on the heavy side. Also, you need to make sure that you do the full priming movement in order for the internal mechanism to work properly. 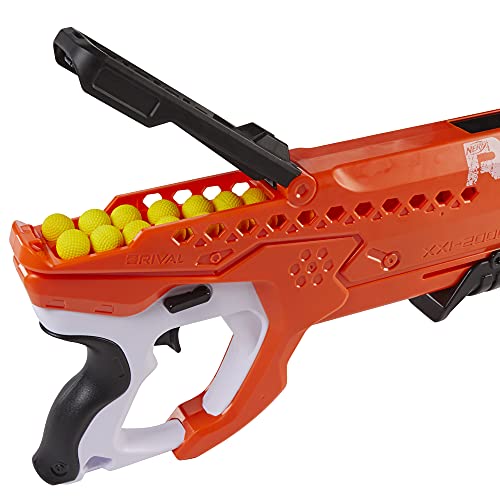 Please do note though that the Helix, due to its hopper design in combination with manual priming, is a bit more prone to dry fires and jams, as the hopper works on a gravity-fed basis.

The best way to avoid these issues is to hold the blaster level while priming to make sure that the rounds gets pushed into firing position properly.

Rival blasters certainly aren’t the cheapest Nerf blasters on the market, and for good reason. They generally perform extremely well, and they typically have a large firing capacity.

The Curve Shot Helix XXI-2000 is actually surprisingly affordable, compared to some of the more popular Rival blasters, yet it still offers excellent performance and great features.

Of course, the Helix is not a fully or semi automatic blaster, but as a well performing, single-fire, pump-action blaster, the Helix offers great value for money.

The biggest drawcard of the Rival Curve Shot Helix is the hopper feeding mechanism that can hold a good amount of rounds, especially considering the fact that this is a manual blaster.

Overall, I do like the Helix. The curve shot feature is fun, and while the hopper mechanism in this blaster can lead to a few hiccups, the priming and firing mechanism is quite a smooth and enjoyable experience.