Launched in October 2019 as part of the brand new Ultra series, the Nerf Ultra One is a motorized blaster with a generous 25-dart drum.

The Ultra One fires Ultra darts, designed and promoted as being the farthest flying Nerf darts ever made. So, with a brand new range of blasters and a new dart type, the expectations for the Ultra One were high.

In this review I am going to walk through some of the top features of the Ultra One, and I will share with you whether this modern blaster has lived up to these high expectations.

You can purchase the Nerf Ultra One blaster on Amazon.

What Is the Nerf Ultra One Blaster?

The idea behind the new Ultra series was to bring to market a range of blasters with superior performance and advanced features. All blasters in the Ultra series fire with Ultra darts, a newly designed type of dart that is meant to improve performance.

But is it really that good? Read on, as we’re going through the features of this blaster in a bit more detail.

Top Features of the Nerf Ultra One

Here’s my take on the Nerf Ultra One blaster.

Let’s start off with the overall design of the Ultra One. Some may not care, but personally I do find the looks of a Nerf blaster important. It needs to look cool, or intimidating even.

The Ultra One fits that bill, as in my opinion it looks fantastic. And not only that, it’s quite an ergonomic blaster as well. It sits nicely in the hands and executing the firing mechanism is a quite a breeze as well.

The comfortable fixed stock at the back holds eight Ultra darts (4 on each side), which is useful when battling it out in a Nerf war. There are also two sling attachment points at the back, and one sling mount at the front of the blaster.

Also worth pointing out is that the 4x C-type batteries sit in the middle of the blaster, creating a good weight balance when using this blaster in action.

In other words, definitely no complaints on the design front at all.

The first thing you’ll notice when looking at this blaster is the rather large, integrated 25-dart drum located towards the front. You’ll need to front-load the Ultra darts, which is a pretty straightforward process.

The Nerf Ultra One is not compatible with any other dart type. You MUST put Ultra darts in there, otherwise it won’t work. In fact, the drum has an inbuilt safety mechanism that blocks other dart types.

Also note that you won’t easily (or ever) find alternative darts from third-party manufacturers that you can use in the Ultra One.

Unlike Elite darts for example, Ultra darts have a rather complicated design, and replicating them is going to be challenging, to say the least.

The Nerf Ultra One is a semi-automatic flywheel powered blaster, and provides a pretty smooth firing mechanism. It’s pretty similar to flywheel blasters in other series, so no surprises there.

The claimed firing distance of 120 feet is a bit generous, or should I say, unrealistic. It does shoot far, but to get to 120 feet, you’d need to shoot at an angle under perfect circumstances with a reasonable amount of tailwind. 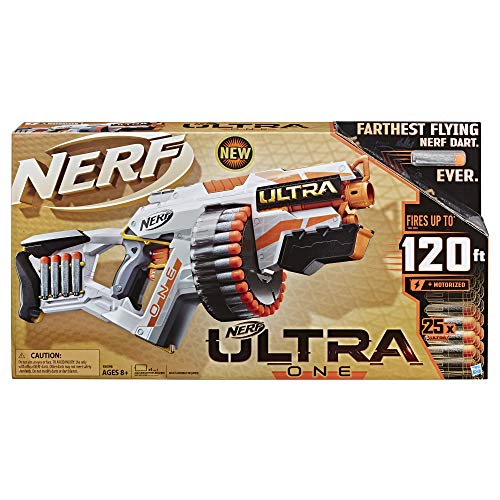 What’s worse though is the accuracy, which is seriously lacking. So whilst it’s great to be able to shoot reasonably far, if you can’t shoot somewhat accurately, then the extra distance doesn’t add much value.

Note that this is the Ultra darts to blame, not so much the actual blaster. But since Ultra blasters only accept Ultra darts, we may as well put the blame on the blasters. Weird sentence, but I hope you get my point.

As you may have guessed, the Nerf Ultra One is somewhat disappointing, mainly because it doesn’t perform as well as it perhaps should be. The main issue here is that Nerf has hyped up this series too much, setting the wrong expectations.

Blasters in the Rival and AccuStrike series, for example, typically perform better. It’s pretty obvious that the new Ultra dart simply isn’t as good as it was meant to be. And that’s kinda tragic, because the Ultra One blaster itself is actually pretty decent.

In short, the Ultra One is a good blaster, but it lacks in performance. And for that reason, if you were planning to buy one, I would recommend the following alternatives: