The Nerf Ultra Five is a great looking spring-powered pistol with an internal magazine that holds 4 darts. It’s the fifth blaster in the Ultra series.

If you’ve read my review of the Ultra One, then you may already know that the new Ultra series haven’t really lived up to the high expectations.

Is the Ultra Five a better blaster? Let’s find out in my review in which I will walk you through the top features of this blaster, and I will share my honest thoughts.

You can purchase the Nerf Ultra Five blaster on Amazon.

What Is the Nerf Ultra Five Blaster?

The Ultra series was introduced in 2019, with the aim to produce blasters that offered superior performance and advanced features. Ultra blasters use Ultra darts, a newly designed type of dart specifically created for this range of blasters to help improve performance.

As mentioned, the Ultra One, a semi-automatic flywheel powered blaster, was a bit disappointing in regards to performance. A great blaster, sure, but not exactly a high performance blaster.

The Ultra Five however, is a single-fire slide-action pistol style blaster with a 4-dart internal clip system. The Ultra Five actually performs quite well, and with a nice design, it could be a blaster that is worth adding to your collection.

Keep on reading, as I am going to walk you through some of the top features of the Nerf Ultra Five.

Here’s my take on the Nerf Ultra Five blaster.

Some may disagree, but I personally do love the design and overall look-and-feel of blasters in the Ultra series, and the Ultra Five certainly doesn’t disappoint in that area either.

I think the color scheme is brilliant, and while the gold Ultra logo is perhaps a bit over the top, I kind of like it, and it suits the theme of the range.

One thing you’ll notice with the Ultra Five is that extra yellow piece at the grip. It looks great, but it doesn’t really add much value at all. In fact, some people may find it uncomfortable, depending on the size of their hands.

Apart from that, the Nerf Ultra Five has a fantastic design, and is super easy to load, prime and fire.

The Ultra Five has a spring-powered firing mechanism, which basically means that this blaster has a spring inside that pushes the plunger forward and backward when being primed, allowing you to fire a dart.

The priming mechanism specifically, and the complete firing experience as a whole, is superb with the Ultra Five. It’s just very smooth and intuitive, which is exactly what you would want to see in a blaster like this.

Personally, I find the Ultra Five overall to be quite a robust Nerf blaster, with no jams or malfunctions at all.

It’s able to shoot quite far and is reasonably accurate, certainly a lot better than the the Ultra One for example. 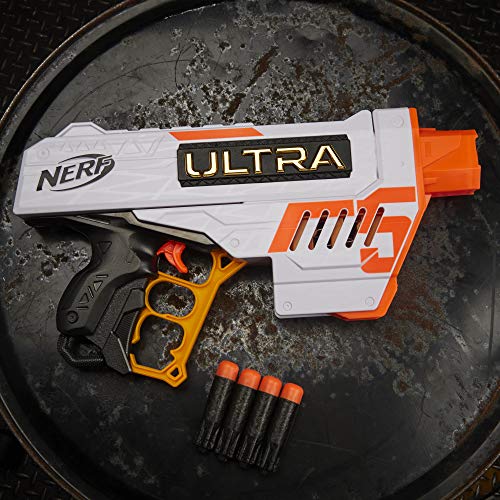 That said though, since high performance was the selling point behind the Ultra series, I don’t think the Ultra Five’s performance meets those high expectations.

But I guess if you just ignore that whole Ultra concept for a moment, then I can say that the Ultra Five is a well-performing Nerf blaster, one that performs better than the average Nerf N-Strike Elite blaster.

Yes, I do think the Nerf Ultra Five is a cool enough blaster that is worth your small investment.

It has a great design and performs reasonably well, however the performance isn’t as good as it could or should have been, considering the idea that high performance was the whole point behind the Ultra series.

I’d still recommend buying the Ultra Five if you’re a hard-core Nerf fan, and you want to grow your collection of blasters. But if you’re purely looking for a new pistol style Nerf gun, there are better alternatives available out there.

Check out these two alternative blasters: