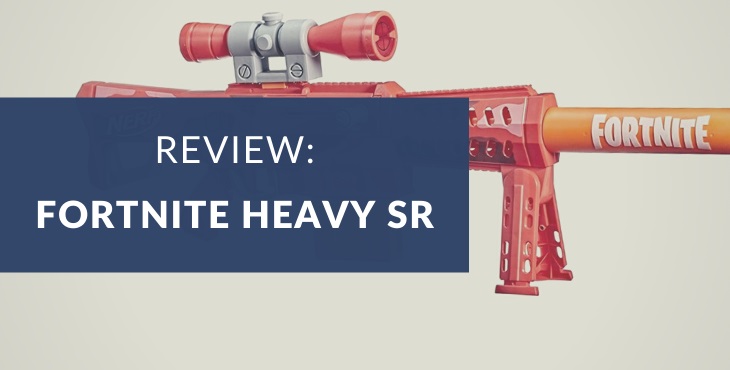 The Nerf Fortnite Heavy SR is a bolt-action sniper rifle style blaster with a 6-dart clip, an integrated bipod, a scope, 6 darts and a rather intimidating design.

In this review, I am going to explain what this blaster is all about, what its main features are, and whether I think it’s worth buying.

You can purchase the Nerf Fortnite Heavy SR blaster on Amazon.

What Is the Nerf Fortnite Heavy SR?

It’s no secret that I am a fan of Nerf sniper rifle blasters, not because they perform so incredibly well, but more so because I simply enjoy the whole sniper rifle experience and the great looks of these blasters.

Lucky for me, the year 2021 brought us a new Nerf sniper rifle, which is the very impressive looking Nerf Fortnite Heavy SR.

As you might already know, the purpose of the Nerf Fortnite Series of blasters is to promote the Fortnite video game. But by no means do you need to be a Fortnite fan in order to appreciate the Fortnite Heavy SR blaster.

The Nerf Fortnite Heavy SR is based on the Heavy Sniper Rifle weapon from the Fortnite game, and does indeed look big and heavy. It has all the characteristics of a mean machine weapon, but is it a good Nerf blaster? Let’s find out.

Here’s my take on the Nerf Fortnite Heavy SR blaster.

Let’s start with what I believe is the biggest drawcard of this blaster, and that is its pure sniper rifle design. The Fortnite Heavy SR really does look like an absolute beast and for many, including me, that alone is enough reason to go ahead and purchase this blaster.

The blaster is packaged in smaller components, and once the blaster itself, the barrel, and the scope are all assembled, you will have quite a large and mean looking machine in your hands. And as the name suggests, it’s also a bit on the heavier side.

Also worth mentioning is the red and orange color scheme of the Heavy SR, which looks pretty cool too, although that is of course subjective.

Loading the darts into the magazine and sliding it in and out of the blaster is super easy. Priming and firing the blaster is also very easy and intuitive, and overall feels like a solid process.

But as smooth and enjoyable the priming and firing mechanism is with the Heavy SR, the performance is lacking. Firing velocity and firing range are noticeably worse than with other Mega blasters and sniper rifle blasters.

This may sound strange, but I find the fact that the Heavy SR can only do single fire mode (and not slam fire) an advantage.

It’s a sniper rifle! Of course sniper rifles should not be able to slam fire, because that’s not what they’re supposed to be doing. That said, the Nerf Fortnite BASR-L, also a sniper rifle, can do slam fire. Go figure.

And while slam-firing with the BASR-L is kinda fun, I much prefer to not be able to slam-fire with this type of blaster. It just doesn’t make a lot of sense.

I have mixed emotions about the Heavy SR. On the one hand, I think it looks absolutely fantastic and offers that true sniper rifle experience. On the other hand, the performance of this blaster is lacking.

Personally, I liked the Nerf Fortnite BASR-L better than the Heavy SR, because it offers a slightly better performance and it feels much lighter in the hands.