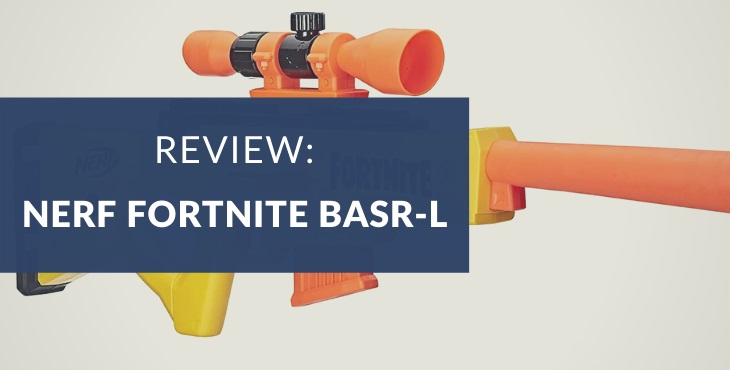 The Nerf Fortnite BASR-L is a bolt-action sniper rifle style blaster with a modest 6-dart clip, a large scope, 12 darts, and a brightly colored design.

Sniper rifles have been hit and miss with Nerf over the years, so let’s find out whether the BASR-L deserves a spot in my list of best Nerf sniper rifle blasters.

You can purchase the Nerf Fortnite BASR-L blaster on Amazon.

What Is the Nerf Fortnite BASR-L Blaster?

Released in June 2020, the BASR-L is a sniper rifle style blaster in the Fortnite series. This range of blasters was created in collaboration with Epic Games to help promote the online game Fortnite.

The BASR-L is based on the Bolt-Action Sniper Rifle (BASR) in the Battle Royale game mode for Fortnite. It’s a classic bolt-action blaster with single-fire mode as well as slam-fire mode.

The bright yellow and orange color scheme of the BASR-L is shared with other Fortnite blasters that fall in the Fortnite Legendary rarity type, which also explains the L in the name.

As mentioned, the BASR-L has a modest 6-dart clip and fires Fortnite darts, which are essentially Elite darts. You will get 12 darts when you buy a BASR-L.

Here’s my take on the Nerf Fortnite BASR-L blaster.

You can clearly see how Nerf has tried hard to create a blaster that really does look like a sniper rifle.

The rather long barrel, the scope at the top, the shoulder stock, the priming handles on the sides, this blaster ticks all the boxes for those looking for that sniper feeling.

It’s worth mentioning that the barrel and the stock are fixed to the blaster, they are not removable. As such, they cannot be replaced or used on other blasters.

The 6-dart magazine, which is a standard N-Strike magazine, can be used on other Nerf blasters. But not necessarily the other way around, due to the design of the magazine well in the BASR-L. Some magazines fit, but some others don’t, which is a flaw.

Loading, priming and firing with the BASR-L truly is a fun and smooth experience. As I mentioned, this blaster has the perfect sniper look and feel, and the overall firing mechanism aligns well with that.

The firing velocity (approx 75 fps) and firing range (max 70 feet) is on-par with other N-Strike blasters. Do keep in mind that the performance overall is obviously never as good as what you get with similar blasters in the Rival or even the Ultra series.

But that’s what the BASR-L is all about. It’s designed to be a fun blaster, not a high-performance mean machine that will win Nerf battles for you.

This one is both a pro as well as a con. The Fortnite BASR-L can single fire, but it can also slam fire. Single fire mode is totally normal and expected for a sniper rifle style blaster, but slam fire doesn’t actually make a lot of sense.

Slam fire simply doesn’t fit a blaster like this, and it kind of takes away that sniper feeling. But at the same time, it’s a fun feature to have. It doesn’t affect the quality of the blaster at all, and if you don’t want to use it, then don’t use it, it’s as simple as that.

To answer my own question in the intro to this review, yes, the Fortnite BASR-L blaster has earned a spot in my list of best Nerf sniper rifles. It’s a fun blaster that has all the characteristics of a sniper rifle.

The slam-fire mode doesn’t make any sense whatsoever, but hey, it’s there for those that want to use it. Performance-wise, the BASR-L doesn’t disappoint either, with reasonable firing velocity and range, like one would expect from this type of blaster.

The biggest drawback perhaps is the modest 6-dart magazine, which could have been a bit bigger. Mind you, for this type of blaster, where it’s all about taking your time and aiming, the small magazine isn’t a deal-breaker.

Like this blaster? Then check out my review of the Nerf Fortnite Heavy SR, a newer sniper rifle style blaster in the same Fortnite series.