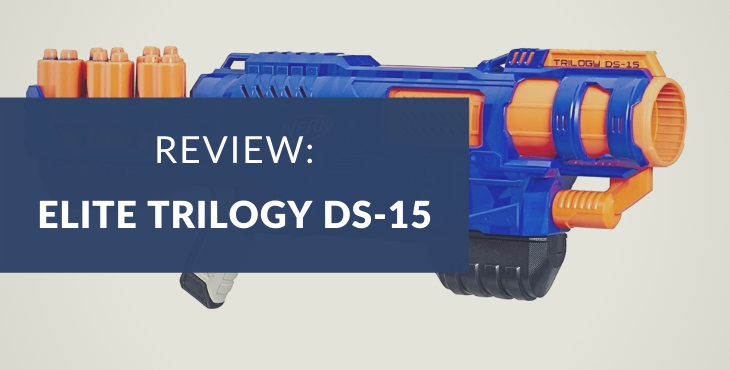 The Nerf Elite Trilogy DS-15 is a spring-powered pump-action shotgun blaster that fires three elite darts at once through shells.

It’s a rather unique blaster in more than one way, and in this review I am going to share my honest thoughts on the Trilogy DS-15 with you.

You can purchase the Nerf N-Strike Elite Trilogy blaster on Amazon.

What Is the Nerf N-Strike Elite Trilogy DS-15?

Released in 2019, the Trilogy DS-15 is a shotgun blaster in the N-Strike Elite series. As mentioned, it fires darts with shells, with each shell containing three darts. The blaster comes with five shells and fifteen Elite darts.

3 Reasons You Need the Trilogy DS-15

Here is my personal take on the unique Nerf N-Strike Elite Trilogy DS-15.

Nerf shotguns are quite rare, they don’t get released very often. I personally like them, but I also understand how they might not be so popular.

What I classify as a Nerf shotgun is a blaster that is able to fire two or more darts or rounds at the same time. There are blasters that may look like a shotgun, for example the Nerf Rival Takedown, but they aren’t the real thing.

The N-Strike Elite Trilogy DS-15 is in fact a real Nerf shotgun, because it can fire three Elite darts at once. And that is what makes this blaster awesome. It may not always be practical, but it is fun, and that’s what it’s all about.

The entire process of priming the blaster, loading a shell, firing, and releasing the used shell, is an incredibly fun and smooth exercise.

The priming action in particular feels super robust and makes all the right sounds, if you know what I mean. Once primed, the little door at the top of the blaster opens, which allows you to load a shell.

Loading a shell is also super easy, and is literally just a matter of dropping it into the opening, and the mechanism will lock it into place after pushing the priming handle. When all that is done, you can fire by pressing the trigger button, and the three darts will fly out of the barrel.

Once you’ve completed that process and are ready to prime for the next round, the used shell will eject out from the side of the blaster. If you don’t want that shell to drop on the floor, simply hold the blaster horizontally and grab the shell.

Is it the most practical firing mechanism? Absolutely not, but it’s very enjoyable.

The Elite Trilogy DS-15 not only functions in a unique way, it also has rather unique looks. It has a somewhat mean looking design, with the wide barrel at the front and the shells stocked at the back.

The recognizable orange and blue color scheme also works really well in combination with the darker bits at the bottom of the blaster.

The Elite Trilogy DS-15 is a niche blaster. It has a unique firing mechanism with shells that may not be for everyone, but it is a lot of fun. And for me, that’s what it’s all about.

Admittedly, firing three darts at once isn’t going to give you any advantage in Nerf wars. If anything, you will just be running out of ammunition a lot quicker.

But if you put that aside for a moment, and look at the overall mechanics and the fun factor of the DS-15, then I can only give this blaster a thumbs up.